Soccer Heading Worse for Women’s Brains Than for Men’s

Soccer Heading Worse for Women’s Brains Than for Men’s

Women’s brains are much more vulnerable than men’s to injury from repeated soccer heading, says a new study by Einstein researchers published in July in Radiology.

Study leader Michael L. Lipton, M.D., Ph.D., and colleagues performed diffusion tensor imaging (DTI), a form of MRI, on 49 male and 49 female amateur soccer players enrolled in the Einstein Soccer Study. Both groups reported a similar number of headings over the previous year (an average of 487 headings for the men and 469 for the women).

DTI detects subtle brain damage by measuring the direction of the diffusion of water in the brain’s white matter. The volume of damaged white matter in women soccer players was five times greater than that for male players. The women had eight brain regions where greater levels of heading were associated with subtle brain damage, compared with only three regions in men.

Researchers speculate that differences in neck strength, sex hormones or genetics might explain the findings.

Should soccer players stop heading? “Rather than ban heading altogether—which probably isn’t realistic—we need a better handle on how many headings get players into trouble,” Dr. Lipton says. “What is important about this study is that men and women need to be looked at differently.” Dr. Lipton is a professor of radiology and of psychiatry and behavioral sciences, the associate director of the Gruss Magnetic Resonance Research Center at Einstein and the director of MRI services at Montefiore. 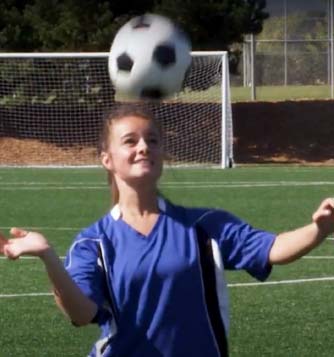