Getting Personal:
An Exclusive Interview with
Dr. Tom Frieden 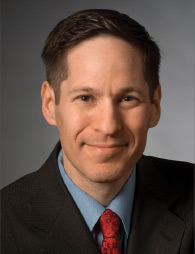 “There is a natural tendency to be comfortable in what we believe. It’s difficult to keep in mind that we always need to question ourselves and improve.”

On May 23, Tom Frieden, M.D., M.P.H., delivered the keynote address at Einstein’s 2017 Commencement ceremony. The former director of the Centers for Disease Control and Prevention (CDC) talked about the personal quality—humility—essential for success in medicine. Shortly afterward, Dr. Frieden shared his views with Einstein magazine on humility, learning from one’s mistakes, fixing the American healthcare system and other issues.

Do most physicians agree with you about humility’s importance?
Remaining humble is a challenge we all face, and a constant challenge for virtually all physicians. There is a natural tendency to be comfortable in what we believe. It’s difficult to keep in mind that we always need to question ourselves and improve.

In your speech, you shared an early experience caring for a patient with heart failure at a time when the consensus was that beta blockers were contraindicated in systolic heart failure, but some research was beginning to suggest that beta blockers could improve heart-failure outcomes. But you didn’t feel confident enough to try this treatment, and the patient died. How did that affect you?
One of the hardest things to do is recognize you’ve made an error, but we have to—and we need to take our mistakes seriously. We also need to ask ourselves: “Did I get the result I wanted?” If we didn’t, how can we do better next time?

You’ve worked with the World Health Organization in India, and served as New York City’s health commissioner and most recently as director of the CDC. Which public health accomplishments are you most proud of?
My proudest accomplishment in each position I’ve held has been mining data and using it to drive progress. When New York City was in the midst of the largest outbreak of multidrug-resistant tuberculosis ever to occur in this country, we were able to document where and how TB was spreading and use that to rapidly control the disease. In India, working with the World Health Organization, we improved diagnosis, treatment and monitoring to expand effective TB control services to half a billion people. Back in New York, I had the privilege of working under Mayor Michael Bloomberg. He really understood public health and supported what we were doing. For example, we were able to show that you can rapidly reduce tobacco use, and we eliminated artificial trans-fats from restaurants.

A lot was happening during your time at the CDC—the Ebola outbreak of 2013–16, the opioid epidemic and the controversy over vaccines. What public health problems deserve more attention than they are receiving today?
Heart attacks and strokes. They seem so common that we’ve become inured to them. But in fact, we are living in an epidemic of cardiovascular disease. And a lot of it is preventable with inexpensive, easily applied tools that we’re neglecting such as lifestyle changes and medication. Even though heart attack rates have dropped in recent years, they are still a leading cause of death.

Globalization has a huge impact on public health. What have you learned about addressing cross-border health risks?
That there is no way we can protect Americans without working globally. Our health is bound up with the health of others, and this means we have to engage with the world. That needs to be more widely understood.

The Trump administration recently released its 2018 budget recommendations. Are you concerned about their public health implications?
They would be devastating for public health. We would be vulnerable to diseases both within our country and around the world. The CDC is the first line of defense to protect Americans from health threats, and if the CDC budget gets cut, healthcare costs will increase and more people will die.

Other than being humble, what are the greatest challenges physicians face today?
One challenge is to learn how to incorporate the vast amounts of data becoming available and apply those data to actual medical practice. These days, it would be malpractice not to give beta blockers to a patient with systolic heart failure. Science has advanced.

If you could change one thing about the American healthcare system, what would it be?
I would align the priorities of patients and the healthcare system overall. The problem is that what’s optimal for patients is not profitable for the system.

Is that because we’re still working largely within a fee-for-service system?
That’s just part of the problem. We end up paying a lot for care that doesn’t deliver anywhere near the health value it could. Some of our institutions are not structured to optimize care, and we do not have a healthcare system that looks at data to hold us accountable for how we are doing.

Your late father, Julian Frieden, served as chief of coronary care at Montefiore for many years. Did he influence you to become a doctor?
My father showed me how satisfying life as a physician could be, especially when it combines rigorous science and the opportunity to shape policy. He practiced evidence-based medicine before the term was even invented and knew that 80 percent of the diagnosis comes from a carefully taken history. He also made use of the latest literature and data to drive treatment decisions. I recall sitting at the breakfast table when I was in high school and learning the CDC had discovered the cause of Legionnaires’ Disease. After that, I wanted to work there.

Do you have a final message for current Einstein students?
Yes. Einstein has a wonderful way of inspiring and humbling future physicians. Humility fosters optimism—about science, the excitement of learning and the opportunity to apply new knowledge.