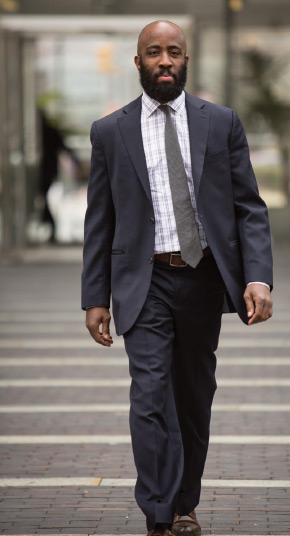 Earle C. Chambers, Ph.D., studies racial and ethnic disparities in chronic diseases such as type 2 diabetes and cardiovascular disease. His research focuses on the link between people’s health and their social and physical milieu, including family size, type of housing, income and education level, access to green spaces, neighborhood safety and exposure to noise. Dr. Chambers has been at Einstein since 2007 and is an associate professor of family and social medicine.

What is the main goal of your research? The behaviors that people adopt and prioritize are crucial for determining their health outcomes. Getting enough exercise, eating “well” and other healthy behaviors depend not just on willpower, but also on whether your environment is conducive to those behaviors. More importantly, in countries including the United States, where racial and ethnic minorities were segregated and relegated to underserved neighborhoods based on racist policies, we must work to undo the damage that living under these conditions has inflicted on segments of our population. My goal is to improve people’s environments to maximize their potential for attaining good health—an opportunity that, in my view, everyone in society deserves.

What prompted your interest in this area? I grew up in Maryland, outside DC, and went to a Jesuit high school, where social justice is part of the education and where I started thinking about using science to advocate for social justice.

What do you like best about Einstein? I’m in the department of family and social medicine, so I didn’t need to sell anyone here on the need to investigate the social determinants of health. That was huge for me.

What’s piquing your research interest these days? Gentrification is in full swing in New York City and is causing many people in low-income neighborhoods to be displaced. I’d like to know how the most vulnerable people of our communities—particularly our patients—are affected.

What kinds of books do you read? The book I’m reading now, Evicted: Poverty and Profit in the American City [by Matthew Desmond], is amazing! It won the Pulitzer Prize for nonfiction but reads like a novel.

Activities outside of work? I’m an outdoor enthusiast! For the last three years my brother and I have hiked sections of the Appalachian Trail, starting in Shenandoah National Park in Virginia. We just finished a section from Harper’s Ferry, VA, into central Pennsylvania—about 60 miles over three days. We’ll do another 60-mile stretch next year.

Any other interests? I’ve been training in Brazilian jiu-jitsu since moving to New York City 13 years ago and usually practice two to three times a week. I just received my black belt, which is a big deal. It’s an activity I can share with my kids.

Are your other family members into jiu-jitsu? My wife and I have two boys, ages 10 and eight, who both love soccer. But when I take them with me to jiu-jitsu practice, they’ll sometimes humor me by working out with me a bit.

What’s your favorite cuisine? My family is from Jamaica, so that’s my go-to cuisine when I have a craving for comfort food. My wife’s family is from Vietnam, and there are definitely some Vietnamese dishes that I like a lot. A Vietnamese sandwich called bánh mì is among my favorites. It’s delicious!