Meet Me on Main Street

Meet Me on Main Street

What was once a dark hallway and warren of rooms on the ground floor of the Leo Forchheimer Medical Science Building has for two years now been called “Main Street”—a bright, well-traveled thoroughfare and destination at the heart of the Jack and Pearl Resnick Campus. It’s home to the Einstein Café (check out the panini press!) and the site of numerous events.

Posters, Posters, Posters. The Einstein community got a close-up view of the work of its Clinical Research Training Program (CRTP) graduates at a poster exhibit on Main Street in December. More than a dozen posters were displayed, covering a range of clinical research topics, including factors associated with longevity, health outcomes of antiretroviral therapy in formerly incarcerated HIV-positive patients and clinical effects of the antibiotic azithromycin in asthmatic children. “Scientists from various medical specialties and subspecialties rub shoulders with each other in the CRTP,” notes former program director Ellie E. Schoenbaum, M.D. “The posters showed the synergy between healthcare services at Montefiore and patient-oriented, translational research at Einstein.”

In March, a crowd of medical students, deans, faculty and staff gathered on Main Street for this year’s exhibit of more than three dozen medical student posters. “It’s a tremendous opportunity for Einstein’s medical students to present the research and community projects they’ve been working on with faculty members at Einstein-Montefiore, at other institutions across the nation and all over the world,” says Dr. Schoenbaum, who is now director of medical student research. “The exhibit affords the students a way to have meaningful conversations with colleagues about their projects.” Dr. Schoenbaum is also a professor of epidemiology & population health, of medicine (infectious diseases) and of obstetrics & gynecology and women’s health.

Doctors Without Borders. Main Street was the setting in May for a reception and photo exhibit sponsored by Doctors Without Borders (also known as Médecins Sans Frontières, or MSF). The exhibit, “Because Tomorrow Needs Her,” captured the challenges women face in getting urgently needed care in four countries. Videos focusing on childbirth in Burundi, sexual health in Haiti, HIV in Malawi and family violence in Papua New Guinea played on the back wall of the open seating area. “The realities of women’s health are not discussed enough,” said Melissa Pracht, a digital content editor at MSF who helped create the videos and exhibit. “I want you bright medical professionals to take these issues and make them top priority.” Also on hand was Patricia Kahn, Ph.D. ’81, who is now a medical editor at MSF and who was impressed with our airy new event space.

Part two of the MSF presentation took place later in the month and also made use of Main Street for a reception. Among those attending were Einstein-Montefiore physicians Lisa Nathan, M.D., an assistant professor of obstetrics & gynecology and women’s health, and Darin A. Portnoy, M.D., M.P.H., an associate professor of family and social medicine. Dr. Nathan also directs the department’s Women’s Global Health program and has worked on fistula-repair initiatives in Africa; she now focuses on maternal morbidity and mortality prevention. Dr. Portnoy has worked with MSF since 1997 in Central Asia, Central America and Africa and was previously president of MSF-USA’s board of directors. After the reception, they took part in a panel discussion in the Mary and Karl Robbins Auditorium on women’s healthcare worldwide. 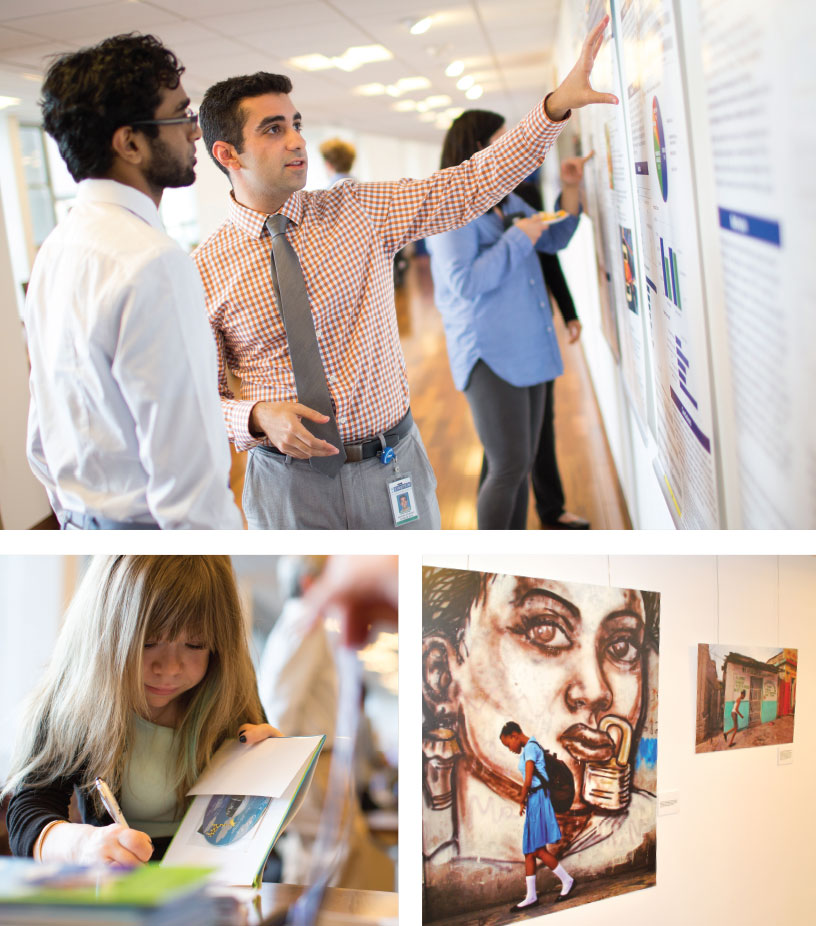 Clockwise from top: Medical students’ posters attracted interest; a street scene from Haiti at the Doctors Without Borders reception; and 18-year-old Alena Galan, who was born with mucopolysaccharidosis type VI, signing a copy of her book, Differences Are Blessings, on Rare Disease Day. Top of this page: photographer Rick Guidotti discusses the meaning of beauty on Rare Disease Day.