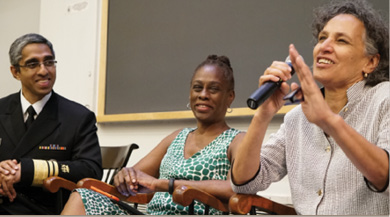 Vivek Murthy, M.D., M.B.A., the U.S. surgeon general, spoke about the opioid drug crisis to an overflow audience on June 30 in Einstein’s Judith and Meshulam Riklis Auditorium. He noted that most people who misuse opioids obtain them from physicians via legally written prescriptions, usually for pain relief. “By sharpening our prescribing practices,” he said, “we can turn the tide.”

Opioid drugs include oxycodone (such as OxyContin) and hydrocodone (such as Vicodin). From 1999 to 2014, overdoses of prescription opioids caused more than 165,000 deaths in the United States. People who misuse opioids are also 40 times more likely than others to use heroin, placing them at risk of infection from HIV and hepatitis B and C viruses.

Einstein-Montefiore was Dr. Murthy’s eighth stop on his national tour, dubbed the “Turn the Tide” campaign, in which he speaks to clinicians about addiction to prescription painkillers. Joining him at Einstein were New York City First Lady Chirlane McCray, who leads the city’s efforts on mental health and substance misuse; Herminia Palacio, M.D., M.P.H., deputy mayor for health and human services; Mary Bassett, M.D., M.P.H., commissioner of the New York City Department of Health and Mental Hygiene; and Leonard Gill, a patient in long-term recovery and a peer educator.

“A shadow of shame hangs over opioid addiction,” said Dr. Bassett. She urged doctors to “ask patients in a nonjudgmental way if they use opioids, just as you ask about alcohol intake.”

Other tactics include making naloxone (for emergency treatment of a drug overdose) more available, connecting patients to treatment and helping patients understand both the benefits and the dangers of opioids.

“With the nation’s second-largest opioid treatment program, Montefiore has been fully engaged in working to stem the opioid crisis and provide the best care to people struggling with addiction,” said meeting host Lynn Richmond, N.P., executive vice president of Montefiore Health and chief strategy officer. “Our approach is to care for the whole patient, from the medical issues to the emotional, social, legal and financial.”

Healthcare professionals nationwide who prescribe opioids will soon receive a letter from Dr. Murthy urging them to intensify their efforts to combat the country’s opioid epidemic.