Einstein investigators secured $174 million from the National Institutes of Health (NIH) in federal fiscal year 2017—the largest annual total in the institution’s history. An analysis of NIH funding conducted by the Blue Ridge Institute for Medical Research shows that Einstein ranks seventh in dollars awarded per investigator (28th in total funding) among the nation’s top medical schools. Einstein’s top-ten ranking was determined by dividing total NIH funds awarded by the number of principal investigators for the top 40 medical schools. (The top 40 institutions all received more than $120 million in 2017.) This places Einstein ahead of such medical schools as Columbia, Stanford, Johns Hopkins, Harvard and Yale. 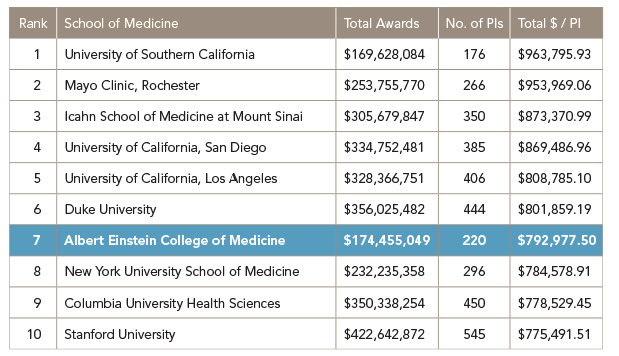