Derek Huffman, Ph.D., studies the biology of aging. He is an assistant professor of molecular pharmacology and of medicine and co-director of the chronobiosis and energetics/metabolism of aging core in Einstein’s Institute for Aging Research.

What inspired you to go into science?

I got interested in doing research when I was an undergraduate and a family member received a dire diagnosis. I felt that research was the best way to make a difference for those burdened with disease.

Where were you raised?

In St. Joseph, MO, a town of about 80,000 people just outside Kansas City. It’s known as “the place where the Pony Express started and Jesse James ended.”

What brought you to Einstein?

I was studying energetics and cancer in graduate school, but became captivated by newly discovered links between metabolism and aging. I came to Einstein in 2007 as a postdoc to explore those links and other aspects of aging under Nir Barzilai, a leader in the field.

Dr. Barzilai studies the genetics of longevity. How do you approach aging?

One of your specialties is an experimental technique called parabiosis. What does it involve?

Parabiosis is an old technique, dating to the 1800s, in which two organisms are surgically joined so they share a single circulatory system. Using parabiosis, we showed that exposing young mice to old blood leads to cellular dysfunction in the gut. We then identified factors in the old circulation involved in causing those changes. These findings could lead to new ways to promote healthy intestinal aging and perhaps delay or treat aging-related metabolic disorders.

The short answer is no, but that hasn’t stopped some from pursuing this for commercial interests. The truth is, we know that not every youthful factor is good for an old body. Bottom line: parabiosis helps identify new candidates that may play a role in aging, but translating these discoveries to human use poses a different challenge.

The National Institute of Aging awarded you a grant to create mouse models of resilience. Could you explain?

Resilience is an organism’s ability to respond to a physical challenge or stress and return to “normal.” It’s thought to correlate with good health and longevity. But we lack good animal models for studying this complex trait. The idea is to characterize how male and female mice respond to various stresses, such as elective surgery and infection, at various ages. We would then use this information to develop rapid, inexpensive assays for evaluating interventions aimed at improving aging, health and resilience.

What is the secret to healthy aging?

Having the right genes is a good start. But that’s rare, and not something you can control. You can delay aging in other ways, most notably through a balanced diet and exercise.

Do you practice what you preach?

I used to run regularly, but now I’m limited by a bum knee from years of playing sports—and the time I spend with my nine-month-old daughter, Emma. I try to stay in shape by riding a Peloton stationary bike, which allows you to compete in online spinning classes. It’s a lifesaver. I can exercise to the brink of exhaustion and my knee won’t pay for it. 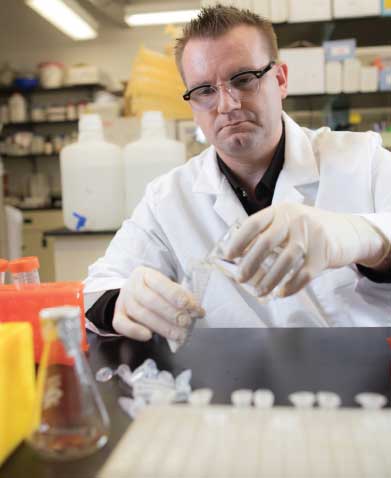