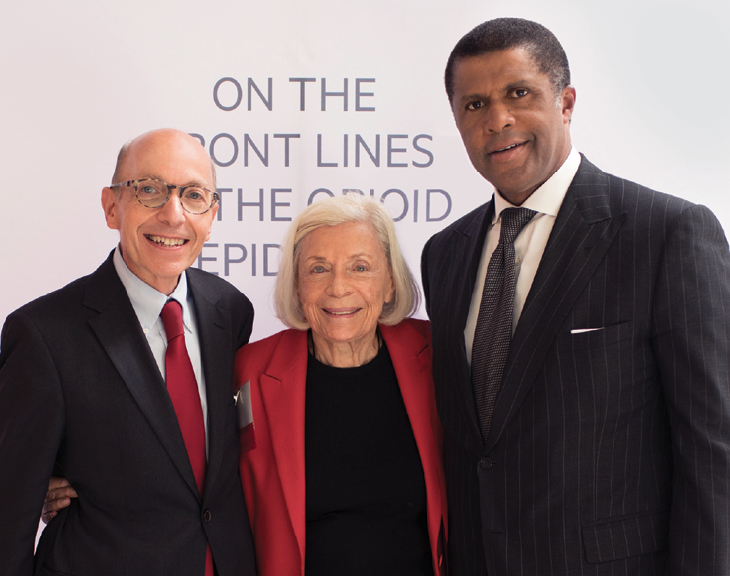 Joyce Lowinson, M.D., was honored for her decades of service to DoSA. With her are Jonathan Alpert, M.D., Ph.D., left, and Montefiore CEO Philip Ozuah, M.D., Ph.D.

Scientists, clinicians, policymakers, and community activists discussed opioid-use disorder’s past, present, and future at a daylong conference at Einstein and Montefiore in September 2019 featuring a keynote address by Michael Botticelli, M.Ed., former director of the Office of National Drug Control Policy under President Barack Obama.

The event, “On the Front Lines of the Opioid Epidemic,” highlighted Einstein and Montefiore’s leadership in the field of opioid-use disorder, from basic and clinical research to community care and outreach services. It also marked the 50th anniversary of the Division of Substance Abuse (DoSA), which was established as an Einstein methadone treatment program and—as a part of Montefiore—has evolved into a leading provider of comprehensive outpatient care at multiple locations for more than 3,400 adults in the Bronx.

Einstein and Montefiore researchers and clinicians discussed recent discoveries, from neuroscientific advances on the brain’s role in reward-seeking behavior to effective, evidence-based opioid-use-disorder treatment strategies. Panel discussions also addressed public policy concerns and the need for reducing the stigma of addiction and structural barriers to care.