The Einstein and Montefiore communities lost a devoted and loyal friend on Dec. 14, 2019. Burton (“Burt”) P. Resnick, chair emeritus of Einstein’s Board of Trustees, whose family legacy includes long-standing support of the College of Medicine dating back to its founding, died peacefully at his home in Rye, New York, at age 83. Burt joined the Einstein board in 1976, serving for more than four decades, including 19 years as chair. 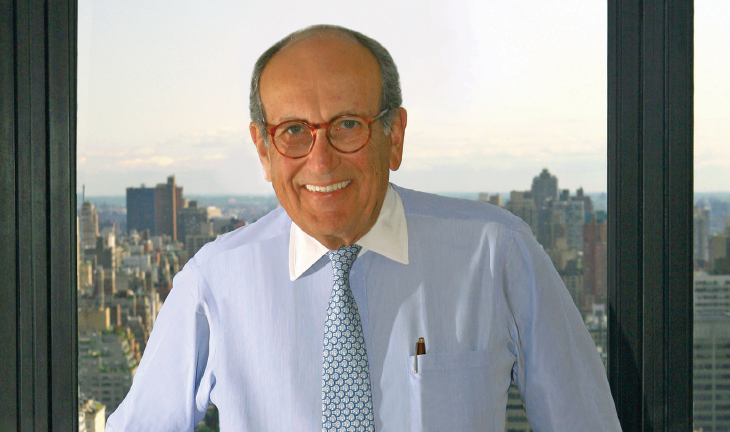 Burt graduated from the University of Chicago with a B.A. in philosophy in 1956 and then joined Jack Resnick & Sons, Inc., the New York real estate development, construction, ownership, and management business that his father founded in 1928. The company’s holdings include a long list of residential and commercial buildings, many of which helped shape New York City’s real estate industry and its skyline.

At the time of his death, Burt was chair and chief executive officer; his son Jonathan has served as president since 2007 and is the third generation to lead the 92-year-old enterprise.

Working closely with Sam Weinberg and other members of Einstein’s board, Burt championed construction of the Michael F. Price Center for Genetic and Translational Medicine/Harold and Muriel Block Research Pavilion.

Burt and his wife of 57 years, Judith, were major supporters of research at Einstein. They partnered with John Condeelis, Ph.D., professor and co-chair of anatomy and structural biology, who is the inaugural holder of the Judith and Burton P. Resnick Chair in Translational Research.

With his sister Marilyn and her husband, Stanley M. Katz, the Resnicks established the Einstein Montefiore Resnick Gerontology Center in memory of the Resnick family patriarch and matriarch, Jack and Pearl, whose devotion to Einstein is recognized through the naming of Einstein’s Jack and Pearl Resnick Campus.

The Resnick and Katz families also teamed with Burt’s and Marilyn’s brother Ira to honor the memory of their late sister, establishing the Susan Resnick Fisher Chair in Brain Cancer Research. This chair supports the research of I. David Goldman, M.D., director of the National Cancer Institute–designated Albert Einstein Cancer Center. The Katz family’s generous support of the College of Medicine includes the creation of a cancer prevention program and is recognized in the title of Einstein’s dean: the Marilyn and Stanley M. Katz Dean.

Burt is predeceased by his parents and by his sister Susan. He is survived by Judith; their three sons, Jonathan, Scott, and Peter, and their wives; his sister and brother-in-law Marilyn and Stanley M. Katz; his brother and sister-in-law Ira M. and Paula Resnick; and nine grandchildren.

Caring for the Littlest Hearts

Targeting a Surprisingly Common Cause of Cancer

Easing the Burden of Medical Debt