How a Learning Health System Can Save Lives 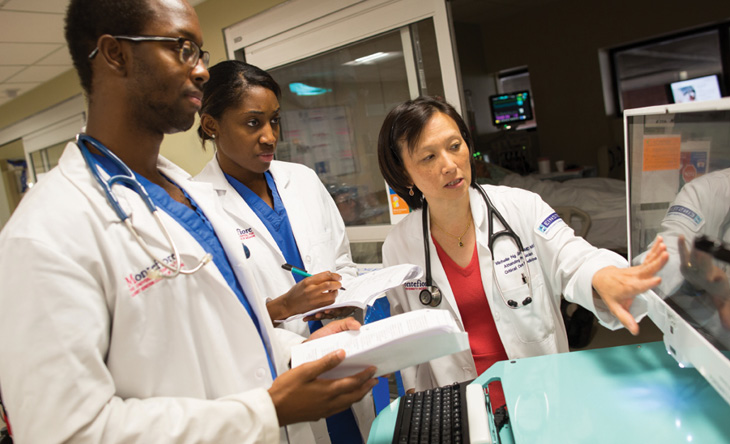 How a Learning Health System Can Save Lives

A multidisciplinary group at Einstein and Montefiore has proved that the Learning Health System model can help medical advances reach patients faster—and save lives. Respiratory failure causes severe breathing problems and is a leading cause of death for hospitalized patients. “Knowing that a patient has a high risk of developing acute respiratory failure allows doctors to take steps to address it,” says Michelle Ng Gong, M.D., chief of the divisions of pulmonary medicine and of critical care medicine at Einstein and Montefiore.

In 2014, Dr. Gong and her LHS colleagues received a five-year, $1.9 million grant from the National Heart, Lung, and Blood Institute (NHLBI) to develop and test a program that would (1) provide an early warning regarding which hospitalized patients were at high risk for respiratory failure and (2) prompt providers to administer proven therapies to those patients.

To create their early-warning system, the researchers worked with artificial-intelligence experts to comb through data collected from more than 68,000 patient encounters at Montefiore and the Mayo Clinic. The researchers determined which signs, symptoms, and other factors could predict risk and then looked for patterns of data indicating that respiratory failure or death was likely.

The result: an algorithm called the Accurate Prediction of Prolonged Ventilation (APPROVE) score. APPROVE continuously monitors the records of hospitalized patients and can alert doctors, raising red flags up to 48 hours before symptoms become life threatening. In validating APPROVE, the researchers found that 20% of patients with high APPROVE scores at any time during their hospital stays either will develop respiratory failure requiring mechanical ventilation or will die in the hospital, compared with only 1% of patients with low scores.

A 2018 study, conducted at multiple medical centers, compared existing early-warning measures with APPROVE. Results showed that APPROVE was the most accurate, with fewer false alarms, in identifying hospitalized patients at risk of death or in need of breathing machines.

“One of the most exciting outcomes of this study is that we were able to demonstrate that APPROVE works in a variety of complex hospital settings,” Dr. Gong says. “That means that patients elsewhere, as well as those at Montefiore, can benefit from it.”

APPROVE scores should help even more if doctors are notified about the best-possible treatments for their patients. That’s where the second fruit of Dr. Gong’s NHLBI-funded research comes in: a patient-specific checklist, called PROOFCheck (Prevention of Organ Failure Checklist), of interventions considered appropriate for that patient. Physicians also have the option to call on critical-care specialists for assistance. APPROVE and PROOFCheck are now both in use at Montefiore.

Forging the Future of Medicine

Connecting the Dots of a Tiny Roundworm