When it comes to ebolavirus, it’s a matter not of whether it will strike again but rather of when and where. The current ebolavirus outbreak in central Africa’s Democratic Republic of the Congo (DRC) ranks as the second-largest and second-deadliest in history: nearly 1,500 cases and nearly 1,000 deaths as of the end of April 2019, according to the World Health Organization.

Children—who are much more likely to die from Ebola infection than are adults—now account for nearly one-third of all cases.

This is the 10th DRC outbreak since 1976, when the ebolavirus was first reported near the Ebola River, and the second this year. The deadliest was the 2013–16 western Africa outbreak, which killed more than 11,000 people.

“Most antibody therapies target just one specific ebolavirus,” says Einstein’s Kartik Chandran, Ph.D., lead author of the first paper. He is a professor of microbiology & immunology and the Harold and Muriel Block Faculty Scholar in Virology at Einstein. 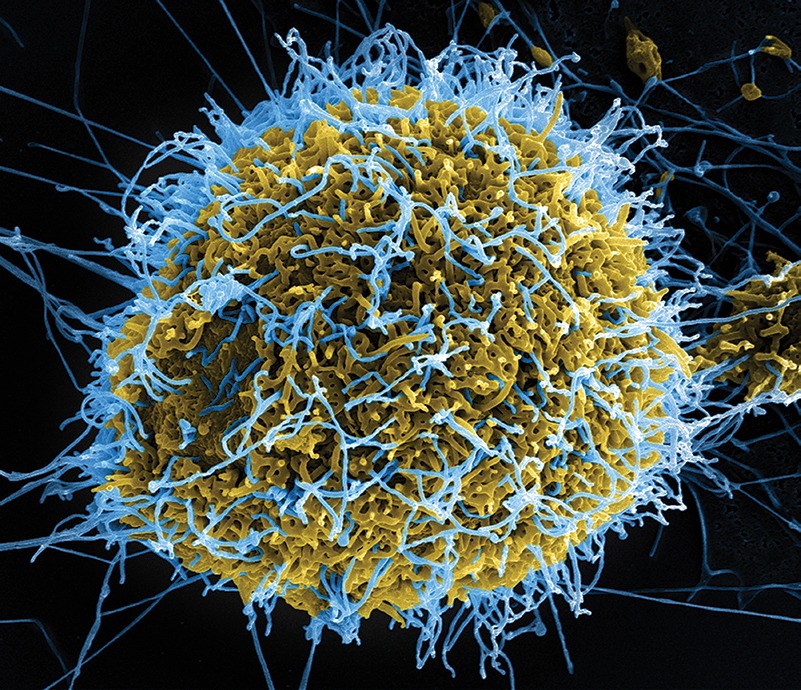 Ebolaviruses (in blue) emerging from an infected cell.

The most-advanced therapy—ZMapp™, a cocktail of three monoclonal antibodies—is specific for Ebola virus (formerly known as “Ebola Zaire”), which is causing the current DRC outbreak. But ZMapp and the other antibody therapies being tested in the DRC don’t work against two related ebolaviruses (Sudan virus and Bundibugyo virus) that also have caused major outbreaks.

“Our antibody cocktail fills the need for a ‘pan-ebolavirus’ drug that would help people infected in any Ebola outbreak, regardless of the virus causing it,” Dr. Chandran says. “It’s the first treatment that could offer broad protection against all three major disease-causing ebolaviruses.”

In the first study, Dr. Chandran led the team that developed MBP134, a cocktail of two monoclonal antibodies (mAbs)—one isolated from a human Ebola survivor, the other from the same survivor but further engineered to recognize and neutralize Sudan virus. MBP134 inhibited infection by all three ebolaviruses in guinea pigs. An improved version called MBP134AF harnessed the power of natural killer immune cells and proved more effective than any previous anti-Ebola mAbs.

In the second study, a team that included Dr. Chandran tested the MBP134AF cocktail in ferrets and macaques infected with the three ebolaviruses. The cocktail was protective against all three pathogens, and just a single dose was able to inhibit viral infection and reverse disease in the macaques. The development of MBP134AF could be a model for quickly engineering new drugs against emerging pathogens.