As he finishes his final year of residency in internal medicine at Montefiore New Rochelle Hospital, Lagu Androga is realizing a childhood dream that began in a refugee camp in Kenya.

“I was sick a lot as a child, always getting malaria and typhoid, and so would frequent the clinics at the refugee camp,” Dr. Androga says.

He remembers the facilities as rudimentary—one or two doctors in a tent with few resources—but the staff as highly skilled and compassionate. “People loved the doctors,” he says. “Parents told their children, ‘You can grow up to be a doctor and help your people.’ I knew then that’s what I wanted to be.” 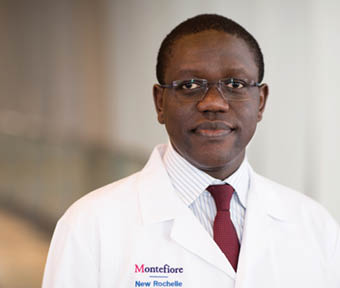 As a refugee, I’ve experienced a lot of discrimination, so the idea that everyone should get good care regardless of who they are or where they come from appeals to me.
— Dr. Lagu Androga

Looking back, Dr. Androga recognizes that time as a gift to both doctor and patient. “We changed each other’s lives,” he says. “I’m sure those doctors could attest to how the experience enriched their lives. And I’m now caring for others just as they once cared for me.” That determination to serve others has led Dr. Androga across three continents to Einstein and Montefiore.

“The way Lagu has overcome his unique challenges has left an imprint on everyone around him,” says Steven M. Safyer, M.D., president and CEO of Montefiore Medicine. The two first met when Dr. Androga was an Einstein medical student. “Lagu doesn’t give up. Once he sets his mind to something, he’s going to make it happen.” That has been true for Dr. Androga his whole life.

Dr. Androga’s family escaped to the United Nations Kakuma Refugee Camp in Kenya when he was a child. Here, the camp as it looks today. (Photo credit: Karumba/Afp/Getty Images)

Escape from a War Zone

Dr. Androga was born in a region of Sudan, Africa, that has since split off into the independent country of South Sudan. By the time he turned 3, his family was caught in the middle of a civil war. His parents’ role as educators and his father’s outspoken support of human rights put them at odds with the ruling government. “They started arresting intellectuals,” Dr. Androga says. “And once you got arrested, you just disappeared.” Dr. Androga pauses to draw a breath: “So we started running. There wasn’t even time to pack a bag.”

It would take the family more than a year to make the harrowing journey south through rebel-controlled areas before they found passage on a United Nations cargo plane that was flying to a refugee camp in nearby Kenya. Dr. Androga describes his shock at the squalor: “It was huge—hundreds of thousands of people crowded together with no infrastructure, living in shelters made of plastic bags.” Even worse, he says, “camp personnel treated us like dogs, like we were less than human.”

A nun saw great promise in the four Androga children and sponsored their attendance at a public school, which allowed the family to relocate. “The school, in Nairobi, was in the biggest slum in Kenya, but it was known for achieving top marks in national exams,” he says. Dr. Androga realized that education would be his only way out. He poured himself into his studies.

Driven to Be a Doctor

In Kenya, medical education starts after high school. Dr. Androga earned the high marks he needed to qualify, but his family couldn’t afford the tuition. He politely declined an offer from a nonprofit organization to sponsor a less-expensive course of study, telling the director: “I want to be a doctor; that’s all I want to do.”

Back in the refugee camp, Dr. Androga was frustrated, but he wrote letters—“to schools, nonprofits, supermarket chains, any place I could think of, telling them of my hopes and dreams.” Eventually he won a scholarship to study at the United World College of the Atlantic in Wales, part of a network of elite boarding schools. Another full scholarship led him to Wesleyan University in Connecticut, where he double-majored in chemistry and molecular biology/biochemistry.

What drew Dr. Androga to Einstein was the college’s mission of caring for underserved communities. “As a refugee, I’ve experienced a lot of discrimination, so the idea that everyone should get good care regardless of who they are or where they come from appeals to me,” he says. But he needed to surmount one more barrier to complete his education. 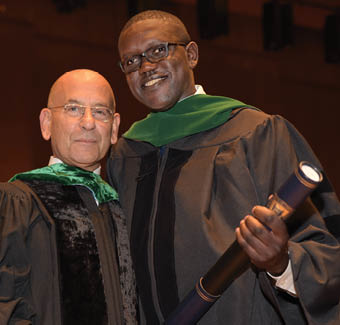 Dr. Steven M. Safyer, president and CEO of Montefiore Medicine, with Dr. Lagu Androga on graduation day in May 2016. 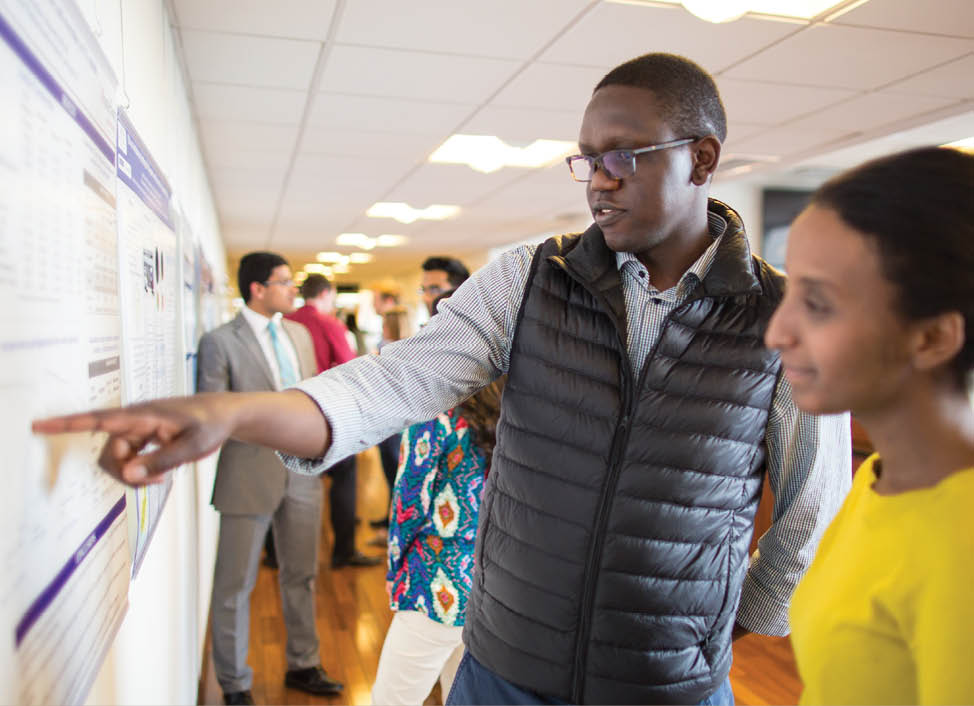 Dr. Lagu Androga and a student look over a scientific poster in the Forchheimer Building.

An accident with a bamboo stick coupled with poor access to medical care had left Dr. Androga blind in his right eye. That disability didn’t limit him until medical school, when he found that his reading speed and subsequent headaches caused serious problems.

Catherine C. Skae, M.D., associate dean for graduate medical education, says she recognized Dr. Androga’s determination while arranging for him to have the extra time he needed to take board exams without straining his eyesight. “He’s tenacious and works so hard,” she says. “It was an honor and privilege to help him.”

That hard work has paid off. Dr. Androga received an award for excellence from the Harold and Muriel Block Institute for Clinical and Translational Research and graduated from Einstein with distinction. Recently he passed the last of his three required licensing exams and matched for a nephrology fellowship at the Mayo Clinic in Rochester, Minnesota.

He also instructs the next generation of medical students and has received a Teaching Star commendation for his efforts.

He continues to be connected to Einstein through clinical research on chronic kidney disease with Matthew K. Abramowitz, M.D., associate professor of medicine (nephrology).

For Dr. Androga, the work is personal: “I was inspired to learn more about nephrology because my mother has kidney disease,”  he says. He also instructs the next generation of medical students and has received a Teaching Star commendation for his efforts.

Dr. Androga still maintains his connection to Kenya, returning there to care for his ailing mother. He says he would like to develop an expertise in global health to help improve health systems in places like South Sudan.

Although their backgrounds are vastly different, Dr. Safyer says that he identifies with Dr. Androga: Both were drawn to Einstein and Montefiore for the same reasons.

“The world would be a better place if everyone had access to healthcare as a fundamental right. That is the ethos that drew me here,” Dr. Safyer says. “Similarly, Lagu worked hard to become a physician as a way of giving back to his community and his country. I know we will stay connected in the future because he is going to do amazing things.”

Mental Health Care Comes to the Heart of Campus