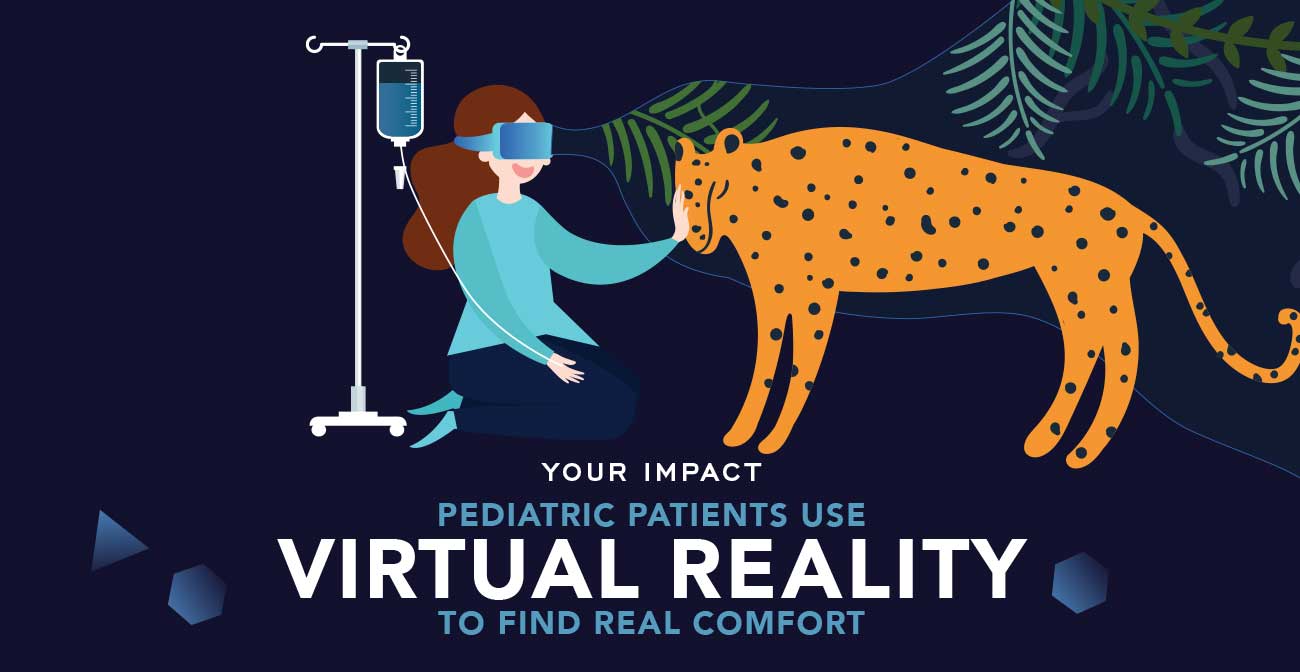 By Teresa Carr and Mandy Walker

On some days she hikes deep  into the forest, climbing past rushing waterfalls on a carpet of yellow wildflowers as birds chirp overhead. On others she plunges into the ocean, swimming through orange and blue fish as a playful seal tries to get her attention. Chiara Valle, 20, looks forward to these outings—all of them in the Bronx, just down the hall from her hospital room.

These adventures are possible because a virtual-reality (VR) headset transports Chiara to exotic places while she receives chemotherapy for a rare and aggressive cancer called Ewing’s sarcoma. Children’s Hospital at Montefiore (CHAM) and its Children’s Hospital Innovation Lab, also known as the “CHILZone,” provide the VR technology. Immersing herself in another space through three-dimensional computer-generated images has helped Chiara deal with months of treatment.

Her favorite VR experience is a walk among the flowers as she is surrounded by butterflies. “I feel them all around me, fluttering in my face,” Chiara says. “They have a special meaning for me since I found out that a yellow butterfly is the symbol of bone cancer,” the type of cancer she has.

“Hospitalized children regularly face tests and treatments that are scary or that hurt, so they’re naturally anxious about them,” says David Loeb, M.D., Ph.D., an associate professor and the chief of the division of pediatric hematology-oncology at CHAM and Einstein. “These digital tools not only help distract them from their illnesses but also ease anxiety and possibly reduce the need for pain medication.” 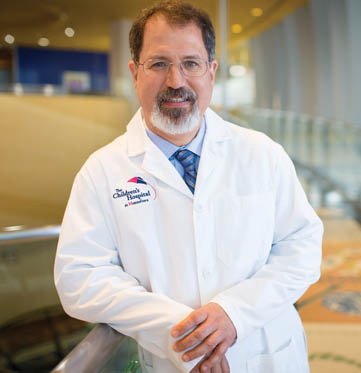 Immersing themselves in another space through computer-generated images helps hospitalized children deal with months of treatment. 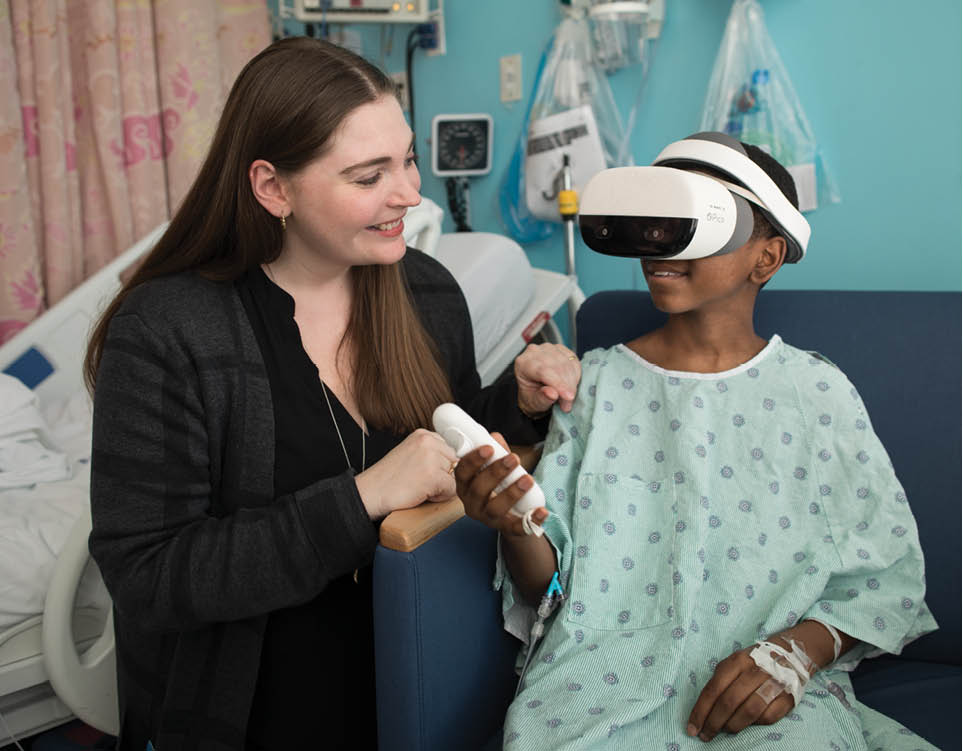 CHILZone director Olivia Davis watches a patient try out one of the hospital’s virtual-reality headsets.

The CHILZone’s director, Olivia Davis, who manages the Fine Art Program and Collection at Montefiore and Einstein, wanted to bring art into the hospital that would engage young people. But initially she was stymied by a space that was cluttered with medical equipment and TVs. Then inspiration struck: “I noticed that people were always on their cell phones or iPads,” she says. “I thought we should meld these worlds in a way that makes sense for healthcare.”

Together with Jodi Moise, director of the Fine Art Program and Collection, Davis came up with a plan that would use the joy and energy of well-known Bronx landmarks. “The majority of
digital-media programs—even those aimed at healthcare—are violent or employ generic relaxation techniques,” Ms. Davis says. “Through the CHILZone, we wanted to produce experiences both familiar and thrilling.”

She started by commissioning Tom Christopher, an artist known for his expressionist paintings of New York City, to create virtual paintings of the Bronx’s Grand Concourse at Fordham Road and the Holiday Train Show at the New York Botanical Garden. “We wanted to use spaces that celebrate the community that the children live in,” Ms. Davis says. “It’s a magical world they can walk around or fly over.”

Achieving that vision has required a huge team of collaborators, Ms. Davis says. “There’s a synergy that happens when you bring together diverse talents—information technologists, care teams, clinicians, and therapists at Montefiore and Einstein as well as industry-leading technology consultants, people from academic institutions, and programmers,” she says.

A busy Bronx street scene comes to life when a painting of the Grand Concourse is viewed through virtual-reality goggles. David Gaynes, Arlene Gaynes,

We wanted to use spaces that celebrate the community that the children live in. It’s a magical world they can walk around or fly over. ­— Olivia Davis

So successful was the VR project that Davis and her collaborators brainstormed ways to use another digital technology: augmented reality (AR). Unlike VR, which immerses users in a different world, AR layers virtual content onto the real world. The CHILZone collaborators wanted to make the hospital less lonely, dull, and scary by allowing children to interact with digital versions of their favorite toys, animals, and people.

“Kids are often hospitalized for long stretches of time,” Dr. Loeb says. “When they are admitted for a bone-marrow transplant, for example, they end up spending about two months with us, in isolation—a tremendous amount of time to be away from their friends and the activities they love.” 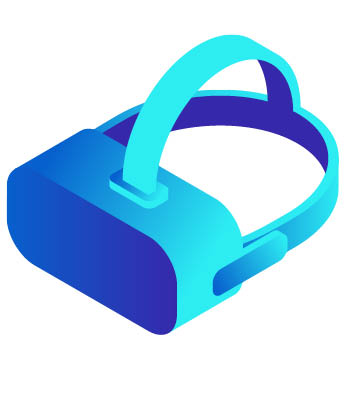 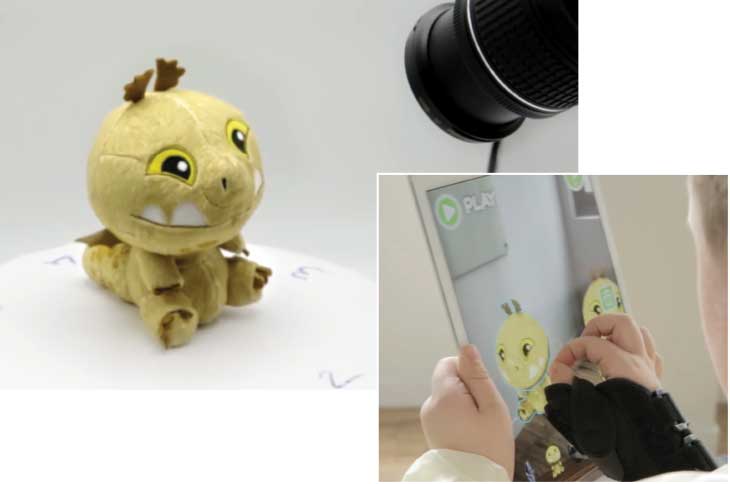 A child’s stuffed animal is photographed so that it can be transformed into a 3-D object that the child can then play with on a tablet.

When David and Arlene Gaynes first heard about the CHILZone, they knew it fit well with their philanthropic vision. The family supports a variety of activities at local hospitals through Chillin’ With Adam: The Adam Gaynes Foundation, named in honor of their son, who died of a brain tumor at age 11. The foundation enriches the lives of families with sick kids, providing assistance ranging from occupational therapy to family days at a local amusement park.

“We know firsthand how difficult it is for children and their families to spend time in the hospital undergoing treatments for a life-threatening disease,” Mr. Gaynes says. He and his wife were drawn to the CHILZone because of AR’s therapeutic potential and VR’s ability to reduce children’s suffering. “Montefiore and Einstein are really at the leading edge with this technology,” he says. “It struck us as something that could have a tremendous impact.”

Mr. Gaynes supports clinical research based on the innovative VR programs at Montefiore. He helped the CHILZone enter a contest run by the NEX Group, a financial-technology firm. After reviewing 19 entries, NEX narrowed the competition to six, and the CHILZone took home the top prize of $150,000. That award paid for the staff and equipment for two clinical trials, for which data collection has begun.

“We want to see how different virtual-reality experiences help children at different ages and with different diagnoses,” Dr. Loeb says. 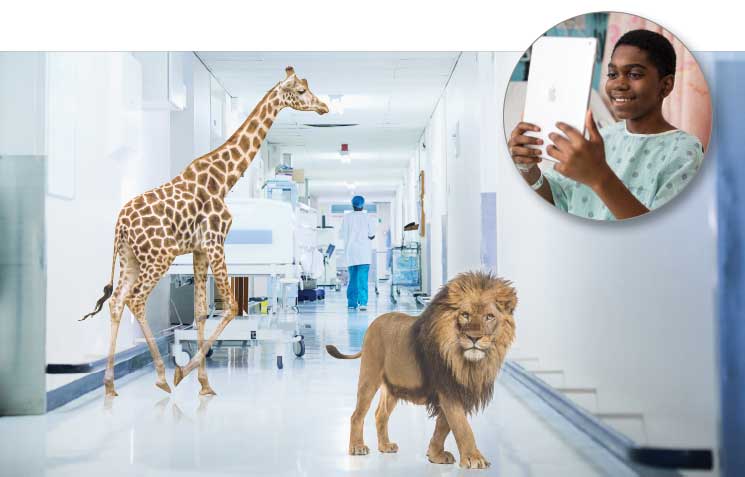 A patient uses the Secret Garden app on his iPad to make a virtual giraffe and lion magically appear in the hospital hallway.

Looking to the Future

When the two renovated floors of the pediatric oncology department open this spring, all young cancer patients will have access to headsets and iPads in their hospital rooms as well as in the exam and infusion rooms. The goal is to raise funds to make VR and AR experiences available in all pediatric patient rooms.

The Corporate Art Awards have recognized the CHILZone’s innovative melding of art and technology. And the art magazine Coda named a CHILZone entry one of the top 100 design and art projects in the nation. 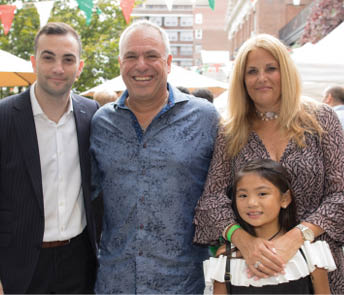 Montefiore and Einstein honored the Gaynes family for their support at the annual Taste of Italy event on Montefiore’s Moses Campus in 2018.

“We know firsthand how difficult it is for children and their families to spend time in the hospital undergoing treatments for a life-threatening disease.” ­— David Gaynes

When Chiara looks ahead, she focuses on adventures “IRL”—in real life. But for now, she’s grateful to slip on the VR goggles and transport herself out of CHAM’s infusion room to another world. “The VR experiences help to ease the nausea I get from my treatments,” she says. “They put me at peace.”

How Virtual Reality May Reduce Pain

Distraction is a time-honored way to cope with pain. If you fall down during a game of touch football, for example, your immersion in the game may anesthetize the pain from a skinned knee. Distraction works for a reason: Focusing your attention elsewhere shuts down some of the circuits carrying pain signals from the point of injury to your brain.

A growing body of research suggests that VR experiences can make medical procedures much more comfortable for children. For example, a 2018 study of 143 young people ages 10 to 21, published in the Journal of Pediatric Psychology, found that those who viewed a VR program while having blood drawn reported significantly less pain and anxiety than those who didn’t experience VR.

Other studies have shown that VR reduces pain from such procedures as getting flu shots, having burn wounds dressed, and having catheters implanted under the skin. 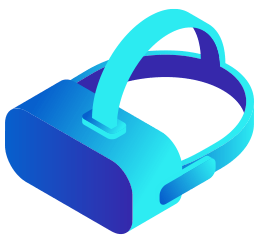