Streamson Chua, M.D., Ph.D., a professor of medicine and in the Dominick P. Purpura Department of Neuroscience, studies POMC and other genes that regulate body weight and fat content. As shown in this image of a mouse hypothalamus, the ARC is adjacent to the pyramid-shaped third ventricle, a fluid-filled space in the brain. POMC neurons stained green/yellow are actively expressing the POMC gene; neurons stained red express an enzyme called Cre recombinase, which tags any cells that have ever expressed POMC.

The image shows that many neurons express POMC during growth and development, but only a fraction develop into adult POMC-expressing neurons. A blue stain called DAPI, which binds to cell nuclei, colors other cells in the region. This image was made by Niloy Iqbal, an M.D./Ph.D. student co-mentored by Dr. Chua and Liang Zhu, M.D., Ph.D., a professor of developmental and molecular biology, of ophthalmology and visual sciences, and of medicine. 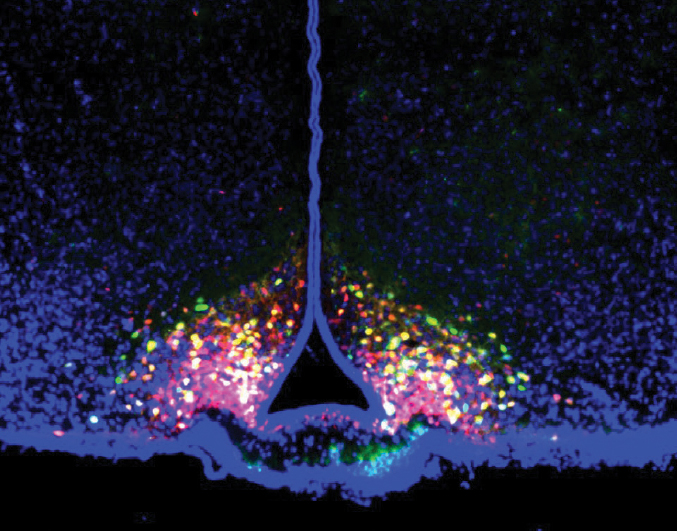