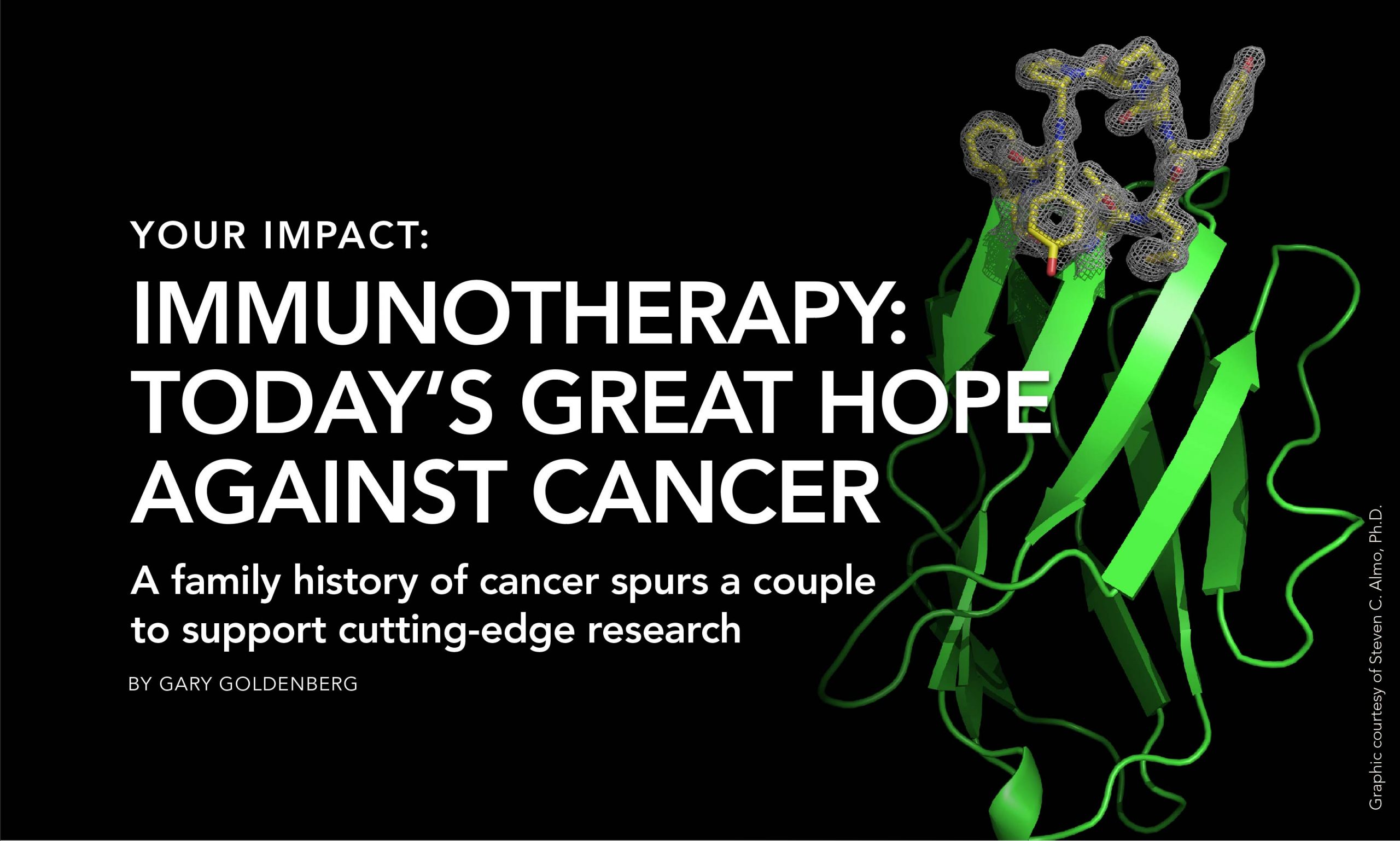 Janet and Marty Spatz are all too familiar with cancer. Janet is a breast cancer survivor; her mother died of stomach cancer, her brother of Hodgkin’s lymphoma. And Marty’s mother succumbed to lung cancer. “It seems like everyone we know has been touched by it,” Janet says.

Determined to do something, the Spatzes went online to look for “cancer research funding opportunities,” and one of the first listings was Albert Einstein College of Medicine. “As longtime Bronx residents, Marty and I were quite familiar with Einstein and its reputation,” Janet says.

The Spatzes decided to support Einstein’s growing efforts in immunotherapy—arguably the most promising cancer-treatment advance of the past decade. “I know what chemotherapy does to your body, killing the good cells along with the bad,” Janet says. “Harnessing your immune system to fight cancer sounded like a wonderful idea.” 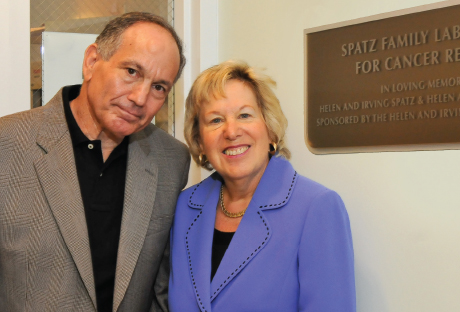 Donations from Marty and Janet Spatz have enabled scientists, researchers, and doctors at Einstein and Montefiore to make great strides against a variety of cancers.

I know what chemotherapy does to your body, killing the good cells along with the bad. Harnessing your immune system to fight cancer sounded like a wonderful idea.”

What Is Old Is New

Immunotherapy dates back to a late-19th-century surgeon named William B. Coley. He’d found dozens of cases in the literature in which a bacterial infection appeared to cause remission of an otherwise incurable cancer. The far-thinking physician designed a bacteria cocktail aimed at stimulating an immune response to soft-tissue sarcomas. Dr. Coley’s “toxins” cured a few patients but killed others, and his treatment fell out of favor. It would take scientists more than a century to grasp why Dr. Coley’s immunotherapy worked and to try to improve on it.

One such scientist is Steven C. Almo, Ph.D., the Wollowick Family Foundation Chair in Multiple Sclerosis and Immunology, a professor and the chair of biochemistry, and a professor of physiology & biophysics at Einstein. Dr. Almo is spearheading Einstein’s new Center for Immunotherapeutics, aimed at developing novel treatments for cancer and other diseases.

Dr. Almo’s own research focuses on T cells—immune cells that recognize and destroy cells infected by pathogens or that have turned cancerous. The U.S. Food and Drug Administration has approved the marketing of several immunotherapies that fight cancers by revving up T cells to attack them.

Immunotherapy drugs can be quite effective but often cause harmful side effects. “The problem is that these drugs tend to affect all T cells,” Dr. Almo says. “Selectively activating only those T cells relevant to a particular disease should help reduce off-target effects.”

Dr. Almo begins his quest for better immunotherapies by looking for molecules called receptors bristling from the surface of T cells he’s interested in, such as those that respond to melanoma or to lung cancer.

Receptors on T cells serve as sentries: they recognize telltale proteins, known as ligands, present on certain cells. The ligands engage with and turn on T-cell receptors, much as a key fits into and opens a lock. The stimulated receptors determine how their T cells behave—spurring them to attack or (in the case of certain receptors) putting the brakes on T-cell action.

After identifying the receptors on a particular type of T cell, Dr. Almo uses advanced techniques such as X-ray crystallography and computational biology to determine the receptors’ precise molecular structure. This information helps him determine the structure of the ligand that uniquely fits into that receptor. Scientists can develop the ligand into an immunotherapy drug to turn specific T cells on or off as desired.

Above: Steven C. Almo, Ph.D., displays an X-ray crystallographic image that his lab created. At right: He looks for crystals suitable for analyzing.

Radiation to the Rescue

Focused radiation is another promising therapy for boosting the immune response to cancer. “Tumor cells contain a lot of defective mutated proteins,” explains Chandan Guha, M.B.B.S., Ph.D., a professor of radiation oncology, of pathology, and of urology at Einstein and vice chair of radiation oncology at Montefiore. “When we use radiation to kill tumor cells, those abnormal proteins are released, along with ‘danger’ signals that alert the immune system to detect the mutated proteins. The immune cells can then target living tumor cells that contain those same proteins and kill them.”

In another study, Dr. Guha is using low-intensity focused ultrasound (LOFU) to bolster the immune system’s response to tumors. LOFU produces thermal and mechanical stress inside the tumor cells, causing some of their proteins to unfold and break down into peptides. When the stressed cells are killed by chemotherapy or radiation therapy, the release of those peptides triggers an immune response to the cancer. In animal models of lung and prostate cancer and melanoma, LOFU plus radiation shrank tumors, reduced the risk of tumor recurrence, and decreased the spread of tumor cells.

Thanks to philanthropists such as the Spatzes, researchers in the Center for Immunotherapeutics can evaluate the use of immunotherapy against numerous health problems, one of which is HIV infection.

“Although today’s therapies for HIV can reduce viral loads to undetectable levels, some HIV still lurks within infected cells and can reactivate once treatment stops,” Dr. Almo says. “We’re working with members of the Einstein-Rockefeller-CUNY Center for AIDS Research to find ways to amplify and activate T cells to eliminate those HIV reservoirs.”

Dr. Almo is also pursuing immunotherapies that selectively suppress T-cell activity rather than activating it. Such drugs would combat autoimmune diseases that occur when the body mounts an overzealous immune response against its own tissues.

As for the Spatzes, Janet and Marty retired to Florida several years ago, but from afar they root for Einstein’s specialists in immunotherapy—and for their beloved New York Yankee baseball team. “Put that in the article,” Janet insists. “Once a Yankee fan, always a Yankee fan.”

Chandan Guha, M.B.B.S., Ph.D., pictured above at right, works in his lab with Ph.D. student Justin Vercellino. At right: They examine colonies of tumor cells that were treated with low-intensity focused ultrasound.