Helena M. Blumen, Ph.D., is a cognitive neuroscientist who studies the brain networks we use to walk, reason, make decisions, and form memories. An assistant professor in the department of medicine and in the Saul R. Korey Department of Neurology, Dr. Blumen was born in Sweden, came to the United States to attend college, and landed at Einstein in 2013, after completing a postdoctoral fellowship at Columbia University Medical Center.

What is your research focus?

I’m interested in optimizing gait and cognition in older people. My colleagues and I view cognition and mobility—particularly in the elderly—as being closely related. For older people, walking is not so automatic as it was when they were young, and they have to think about the steps they’re taking. So walking becomes a cognitive task that relies on the same or similar brain networks as cognitive processes such as memory and attention. Our studies will investigate whether training older people to improve their gait can also improve their cognitive processes, and vice versa.

If you had to focus on improving just one—gait or cognition—which would you choose?

What do you especially like about working with older people?

The people who participate in our studies are very happy to be here and excited about being involved in research. And from our perspective, we really value the research data they provide.

What’s your opinion of brain-training programs, such as Lumosity or CogniFit?

I think some of them have potential, but we don’t know yet if they work. I’m now involved in two trials that are assessing whether behavioral interventions can help. One is an imagery study in which we teach older people to imagine themselves walking. The idea is that imagining walking will stimulate the brain regions involved in actual walking and improve walking ability—and, by extension, cognitive processes as well. This might especially help people who are frail and not able to get outside. The other trial is comparing social dancing with treadmill exercising with respect to gait and cognitive outcomes.

Where in Sweden are you from?

I was born in the town of Luleå, a couple of hours by car from the Arctic Circle.

Did you ski there?

Yes, I was an athlete growing up and did cross-country skiing, and also played soccer. I don’t ski much anymore but I stay active by doing cross-training exercises at a health club.

What else do you do in your spare time?

Do you make any Swedish dishes?

I make my own gravlax, which is cured salmon. You rub a mixture of salt, sugar, lemon, and pepper into two salmon filets, then use a heavy object to press the meat sides of the filets against each other for a couple of days in the refrigerator. It’s not that hard to make, and it tastes great. 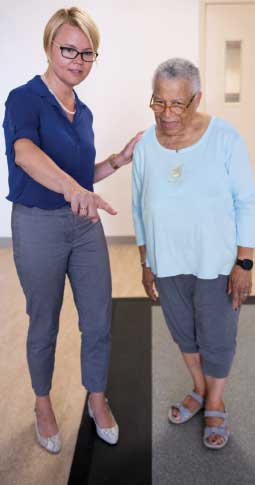 Dr. Helena M. Blumen, left, works with a participant in a study of gait and cognition.