Deciding on a patient’s treatment can be challenging. Imagine how much more complicated that would be if your patient were in a spacecraft more than 200 miles above the Earth.

That’s just part of the job description of a NASA flight surgeon. These specialists care for NASA astronauts before, during, and after their time in space. They oversee the astronauts’ fitness training and manage their various physiological responses to their flights. 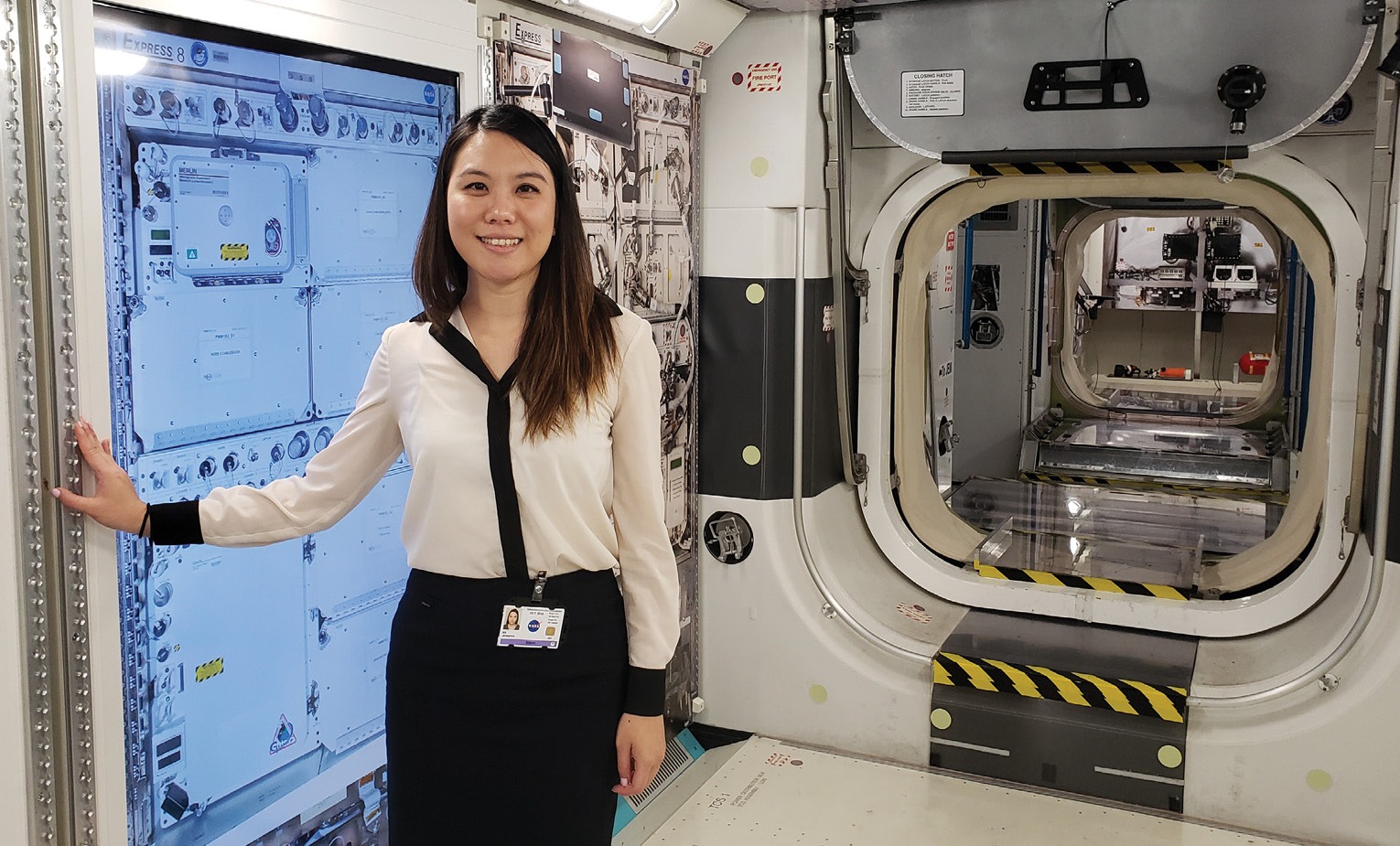 Jennifer Ma, M.D., who graduated from Einstein in May, was part of a select group that experienced the life of a flight surgeon during her month in NASA’s Aerospace Medicine Clerkship program at the Johnson Space Center in Houston, Texas, last fall.

Dr. Ma had worked in the radiation biology lab of Simon Powell, M.D., Ph.D., at Memorial Sloan Kettering Cancer Center in New York City for two years while at Einstein. She became interested in the clerkship when she learned that one of NASA’s research priorities is the study of radiation risk for astronauts. “I realized the program might give me a new perspective on radiation,” she says.

Dr. Ma was one of only 18 people accepted into the four-week program. Like the other participants, she was assigned a group research project. But she was one of just a few clerks given two mentors: Johnny Conkin, Ph.D., an environmental physiologist, and Joseph Dervay, M.D., a flight surgeon and the leader of the medical operations group. 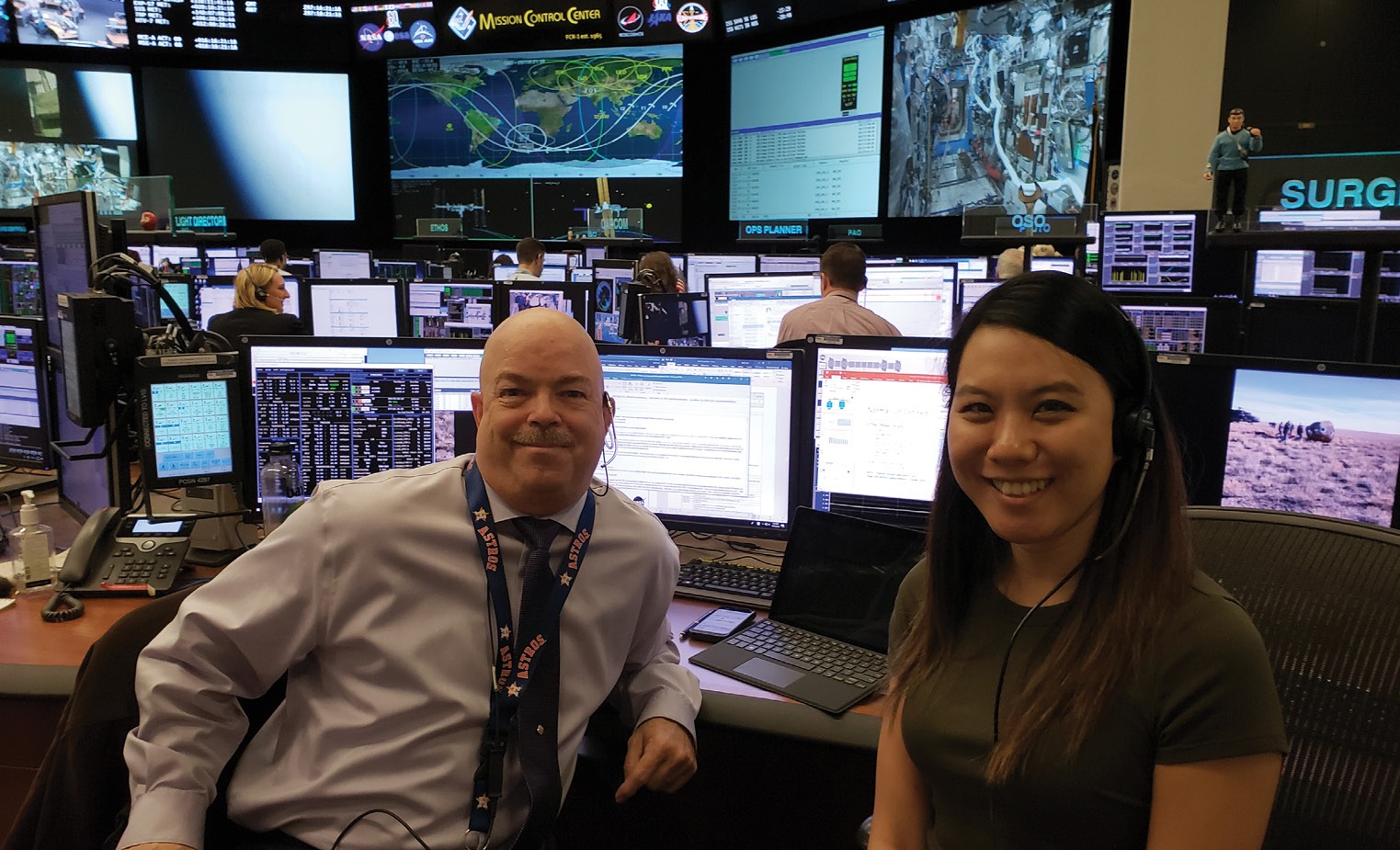 I realized the program might give me a new perspective on radiation.

Her group’s challenge: To create an augmented first-aid kit for an upcoming flight-simulation experiment in which eight people—two medical staff members and six volunteers—will live inside a three-story, 20-foot-tall chamber at the Johnson Space Center for 11 days. The first-aid kit must address any conditions that the crew members might face during their space mission, which is set for the first quarter of 2020.

“We wanted to include medications for many common ailments, such as infections or allergic reactions, in order to ensure that the experiment wouldn’t end prematurely because of a minor medical issue that worsened during the study,” Dr. Ma says. Other necessities included medications for insomnia and an upset stomach as well as supplies such as gauze, tourniquets, and bandages to treat minor trauma.

“They won’t be doing anything considered dangerous, but there is a narrow metal staircase that someone could trip on, and low ceilings where they might hit their head,” Dr. Ma says. The two medical staff members on board will be able to administer any needed treatments. 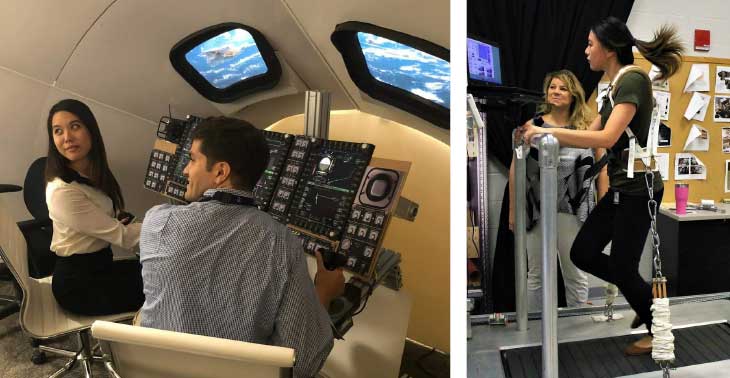 Above left, Dr. Jennifer Ma sits at the controls of the NASA Orion spacecraft training mockup with a fellow clerkship team member. Above right, she runs on a NASA treadmill wearing a special weighted vest that serves as a countermeasure for muscle and bone loss while in orbit. (Photos courtesy of NASA JSC Aerospace Medicine Clerkship, October 2018)

The chamber will undergo pressure changes at six-hour intervals throughout the experiment to simulate an astronaut’s potential schedule of extravehicular activities while in space, so Dr. Ma also had to factor that in when considering which medications to bring on board.

“We were concerned that anything in blister packs might burst after frequent pressure changes, so we put those medications in bottles,” she says. “And we had to check with a pharmacist about whether the liquid medications would still be stable after repeated pressure changes.”

Not all of her time at the Johnson Space Center was spent working on her project. “Most days we heard lectures or toured different parts of the facility, which was a ton of fun,” she says. Lecture topics included space physiology, environmental health, exercise physiology, space nutrition, an in-depth look at the International Space Station, and Mars mission scenarios.

“We also learned about spaceflight- associated neuro-ocular syndrome, or SANS,” Dr. Ma explains. While fluids in the body are pulled downward by gravity here on Earth, they can shift in a person’s skull during space travel and affect an astronaut’s vision. SANS is thought to be caused by this increased pressure in the head and especially in the eye area during and after long flights in space.

Radiation exposure is also a major concern. “Astronauts are exposed to a chronic low level of radiation while in space, which NASA can attempt to offset with shielding,” Dr. Ma says. But there are also unpredictable solar storms, which can expose astronauts to high radiation levels. “Traveling to Mars takes a long time, so you have a higher risk of radiation exposure overall,” she says.

Because of her keen interest in the topic, Dr. Ma asked for a closer look at the radiation biology lab at the Johnson Space Center. She not only was granted a tour, but also got to talk to the head of the lab, Honglu Wu, Ph.D., about the lab team’s current research and the clinical data it collects. “They obtain blood samples from astronauts before, during, and after space flights, and they analyze those samples, looking for changes.”

They obtain blood samples from astronauts before, during, and after space flights, and they analyze those samples, looking for changes.

At the end of the four weeks, each clerkship group created a scientific poster that summarized its results. “I presented them to everyone at the space center who was interested, and we got to meet everyone’s mentors plus many of the other NASA staff in a wide spectrum of  departments,” Dr. Ma says.

She had the chance to reunite with many of her NASA clerkship colleagues last May when her abstract had been accepted for poster presentation at the 2019 annual meeting of the Aerospace Medical Association in Las Vegas. There she was awarded the Stanley R. Mohler, M.D., Aerospace Medicine Endowed Scholarship, worth $750 and intended to fund research activities.

Dr. Ma matched at her top residency choice, Memorial Sloan Kettering, for radiation oncology. She is completing her transitional year now at Presence Saint Francis in the Chicago area. Dr. Ma calls the NASA clerkship one of the highlights of her time in medical school. “I never thought I’d have the opportunity to do half of the things I did,” she says. “I’ve made great friends and hope to continue collaborating on research projects.”

SPECIAL VIDEO
Watch an astronaut train for a space walk.

Hanging Out With Astronauts

A NASA clerkship has its perks: The 18 students in the fall session were invited onboard a life-size version of the International Space Station on site at the Johnson Space Center called the Space Vehicle Mockup Facility (SVMF). They were also invited to visit the Sonny Carter Training Facility, which houses the Neutral Buoyancy Laboratory, where they watched astronauts conduct underwater maneuvers.

During their visit to the SVMF, “we got lucky and bumped into an Italian astronaut and engineer, Luca Parmitano. He lived on the space station and was giving a tour to two of his friends,” says Jennifer Ma, M.D., ‘19. “He invited us to join his tour, too, so instead of having a guide who said, ‘This is this module and what it does,’ he shared more-personal details, like ‘This is where I would hang out,’ and ‘I don’t like this area because sometimes it gets smelly.’”

Dr. Ma’s tour group was again in luck during its visit to the Neutral Buoyancy Laboratory, which prepares astronauts for space walks. “It’s basically a giant indoor pool that’s large enough to house a version of the International Space Station surrounded by 6.2 million gallons of water,” Dr. Ma says. They arrived just as an astronaut training session was starting, so they witnessed two astronauts don their space suits, get hooked up to oxygen, and be lowered into the pool. Then they watched the astronauts on video screens carrying out simulations of extravehicular activities, which are excursions performed outside a spacecraft.