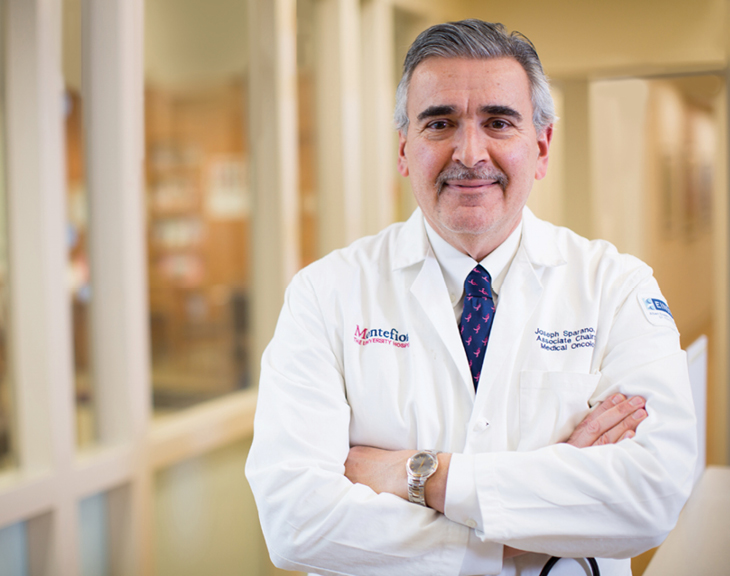 The widespread use of antiretroviral therapy has helped people with HIV live healthier, longer lives—but it also means an increased risk for developing cancer. For 25 years, the AIDS Malignancy Consortium (AMC) has led efforts to improve and treat HIV-related cancers. Now Montefiore and Einstein have received a five-year, $111 million National Cancer Institute (NCI) grant to lead this international research consortium.

“People living with HIV shoulder an enormous burden of cancer,” says Joseph Sparano, M.D., associate chair for clinical research in the department of oncology at Montefiore, associate director for clinical research at the NCI-designated Albert Einstein Cancer Center, and principal investigator on the grant. “Montefiore and Einstein are perfectly positioned to lead this organization and steer research advances.”

Approximately 38 million people are infected with HIV, including 1.2 million in the United States. People living with HIV have an increased risk of developing cancer compared with the general population and are more likely to die of cancer, interrupting otherwise healthy lives. This is due to a variety of causes, including long-term inflammation and an overtaxed immune system.

In addition, HIV infections are concentrated in marginalized communities in the United States, primarily among people of color, who make up approximately 70% of new infections. “AMC is the only organization worldwide solely dedicated to the study, treatment, and prevention of cancer in this group of people,” Dr. Sparano says.

The AMC oversees a network of 42 clinical trial sites in the United States, Africa, and Latin America, as well as translational scientists who support its clinical trials. It also runs a career enhancement program to cultivate the next generation of leaders. Luca Paoluzzi, M.D., director of the HIV Oncology Service at Montefiore and assistant professor of medicine at Einstein, will act as the AMC’s principal investigator at Montefiore and Einstein.

In collaboration with Harris Goldstein, M.D., director of the Einstein-Rockefeller-CUNY Center for AIDS Research (CFAR) and professor of pediatrics and of microbiology & immunology at Einstein, Dr. Sparano has established a scientific working group focused on cancer and HIV that will guide the direction of future collaborative research at the CFAR and the AMC.

The group will be co-chaired by Dr. Sparano and Howard Strickler, M.D., professor and chief of epidemiology in the department of epidemiology & population health at Einstein and Montefiore.