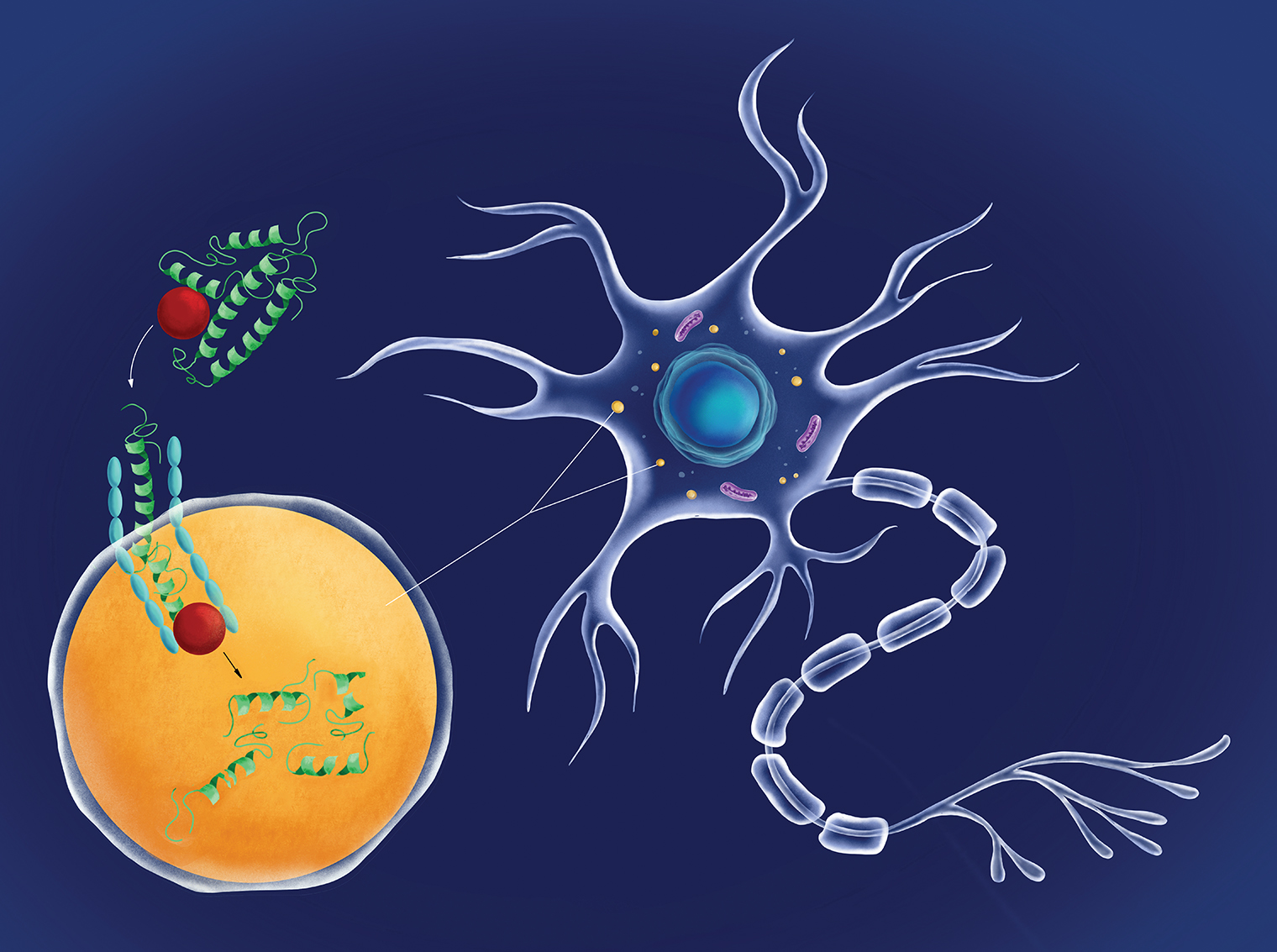 Chaperone-mediated autophagy in a neuron: A protein chaperone (red circle) escorting a molecule of damaged tau protein (green) docks with a LAMP2A receptor (blue) on the neuron’s lysosome (orange) and pushes the tau protein inside the lysosome, where it is digested. The more LAMP2A receptors on lysosomes, the greater the level of CMA activity possible. The novel drug called CA, developed by Dr. Cuervo and her team, works to rev up CMA by increasing the number of LAMP2A receptors on neurons.

Einstein researchers have designed an experimental drug that has reversed key symptoms of Alzheimer’s disease in mice. The drug works by reinvigorating a cellular cleaning mechanism that gets rid of unwanted proteins by digesting and recycling them. The study was published in April 2021 in Cell.

“We were encouraged to find in our study that the drop-off in cellular cleaning that we have observed in mouse models of Alzheimer’s also occurs in people with the disease, suggesting that our drug may also work in humans,” says Ana Maria Cuervo, M.D., Ph.D., the Robert and Renée Belfer Chair for the Study of Neurodegenerative Diseases, professor of developmental and molecular biology, and co-director of the Institute for Aging Research at Einstein. In the 1990s, Dr. Cuervo discovered the existence of this cell- cleaning process, known as chaperone-mediated autophagy (CMA).

CMA becomes less efficient as people age, increasing the risk that unwanted proteins will accumulate, forming insoluble clumps that damage cells. In Alzheimer’s, defective copies of the protein tau clump together to form neurofibrillary tangles that contribute to the disease. In fact, Alzheimer’s and all other neurodegenerative diseases are characterized by the presence of toxic protein aggregates in patients’ brains. The paper’s findings suggest that drugs for revving up CMA may offer hope for treating neurodegenerative diseases.

In an encouraging finding, Dr. Cuervo and her team developed a novel drug, called CA, that shows potential for treating Alzheimer’s. “We know that CMA is capable of digesting defective tau and other proteins,” says Dr. Cuervo. “But the sheer amount of defective protein in Alzheimer’s and other neurodegenerative diseases overwhelms CMA and essentially cripples it. Our drug revitalizes CMA efficiency by boosting levels of LAMP2A, a key CMA component.” (See illustration, above.)

The researchers tested the CA drug in two different mouse models of Alzheimer’s disease. In both models, oral doses of CA administered daily over four to six months led to improvements in memory and reductions in depression and anxiety that made the treated animals resemble or closely resemble healthy control mice. And in the brains of both animal models of Alzheimer’s, the drug significantly reduced levels of tau protein and protein clumps as well as gliosis—the inflammation and scarring of cells surrounding brain neurons. The drug was designed by Evripidis Gavathiotis, Ph.D., professor of biochemistry and of medicine and a co-leader of the study.